Deathwish: We nearly hospitalized our producer for an ADDY

Deathwish: We nearly hospitalized our producer for an ADDY
Guest Blog by Christopher Coe

I remember hearing of the RAF ADDY’S as far back as my first year of undergrad. It was Spring in Rochester as Juniors and Seniors scrambled around the building having prints made and mounted with thick borders. Requests for large prints backed up our on-campus lab, and the School of Photographic Arts & Sciences was filled with a tense, but excited air. When I spoke to an upperclassmen I admired about what was going on, they let me know – it was ADDY season. The most talented figures in RIT Photo were submitting their absolute best work to be judged on a regional (hopefully national) level. From intricate still-lives to produced group projects, my university’s work felt strong.

It wasn’t until my Senior year at the Rochester Institute of Technology that I submitted my own work. I wanted to guarantee the images I entered would be my absolute strongest work up to that point.  For me, I put forth a selection of photographs from my 3rd year Ad Project. At RIT, the Ad project is one of the biggest moments for those in the Advertising Photography program – a proving grounds, of sorts. The class is divided into small groups, and eight sleepless weeks are spent creating a campaign from scratch. The goal is to work collaboratively and create something bigger than we could on our own. For teammates Adam, Fontaine, and I, this manifested as a mock campaign for Death Wish Coffee.

As we brainstormed photographs that illustrated the world’s most caffeinated cup of coffee, we knew we needed to create punchy, heavily produced images. It was our goal to craft several different scenes and stage them with high-energy characters. From a skydiver without a parachute to an image we code-named “explosion grandma,” this project was tremendous. For one shot in particular, our producer was on set lighting gunpowder to create thick smoke – in hindsight that may have been a bit dangerous. In the end, we pulled out all the stops to create a series of images we would all be proud of.

I was stepping off a flight from Portugal when one of my teammates for the Ad Project, Adam, and my professor Clay Patrick McBride began texting me non-stop. As I scanned through a flurry of text messages and photos taken from the RAF ADDY’S stage, I knew something big had gone down: Team Deathwish had won the gold.

Adam and Clay accepted the award on our team’s behalf, and I was ecstatic. To be awarded a Gold ADDY was to have our work validated. It meant that our pictures were worthwhile.

In the next five years, it is my intention to actively be photographing editorial work in New York and LA. My passion for portrait photography is what drives me to pick up a camera every day – and I still have so much work to do.

To those looking to submit to the ADDY’S and have their work acclaimed in front of the masses, I recommend submitting early and often. Do not hedge your bets on a single submission of strong work. Apply annually, and be rejected. Embrace failure and rejection wholeheartedly. Then learn from it, revise, and solider on.

Finally, a close mentor of mine has imparted me we with a wealth of knowledge and advice over the past few years. There is one piece in particular has really stuck, though: 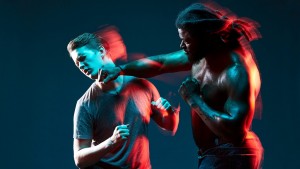 See more of Chris Coe’s work + follow him on IG