A Day With David Carson- Graphic Design Innovator (well, 36.5 hours to be exact)

Carson flew in about 9:15 Thursday night from LAX by way of Chicago, his flight delayed two hours and barely making his connection. He looked hungry and tired. We quickly went off to his hotel to check in him. I said, “you must be starving.” He said he wasn’t that hungry, but I knew he was lying. I asked what he was in the mood for and he came back with a classic answer, “Someplace cool.” I took him to Restaurant Good Luck, one of the RAF’S favorite spots. We shared a bunch of things and I could see the life coming back to him.

He started to ask lots of questions about R/Adweek, the advertising scene in Rochester and some of the other R/Adweek events.  We talked about our monthly 20 Minutes and a Beer event and we got on the subject of Wall Therapy, the community art mural projects. Next thing I know we are driving down all of the side streets on Atlantic between Anderson and Culver so David can see some of the murals, he asked me to pull over so he could snap some shots of the bigger pieces. By now it’s almost midnight.

I pick him up in the morning around 11:30, as he previously mentioned he is not a morning person.  We go to lunch at 2Vine and are greeted by a host of Rochester ad veterans, newbies and some in between, all eager to meet David. We introduce ourselves and our roles at work. The conversation gets off track, so we decide to go around the table taking turns asking questions.  David laughs and said, “what happened to the relaxed lunch?”  I think he was half serious but then settles when he realizes the questions were not very critical in nature and more genuine curiosity. We wrap up lunch and take some photos. Then I usher him off to see some of the classic works of the Cary collection at Wallace Library on RIT campus. After driving for about 10 minutes he apologizes that he didn’t realize it was that far. I said it would be worth the wait. We were met by Curator Steven Galbraith who saw us coming and starts by showing us their new shopping bag collection that includes some by Andy Warhol and Yoko Ono, among others.

He ushers us inside to view some of the classic works by greats like Paul Rand, Saul Bass and some of the pre-WWII Russian designers.  He is particularly impressed with some of the work of George Guisti.  David admits he could spend days in here and that his lack of classical training has led to a supreme curiosity about the work of the great classical designers. Our time is almost up so we try to get out of dodge as quickly as possible.  On our way out, two people stop us at the door, one of which is world-famous comic book artist Adam Kubert who has worked on Xmen, Incredible Hulk and Spiderman to name a few. They are mutually happy to make the connection.

We fly off to his hotel so he can prepare for the R/Adweek main event. After seeing Rochester, David mentions he wants to make some edits to his presentation.  I pick him up at the last possible second before the event starts.  He wants to meet people and take pictures, so I let him mingle and talk. The event starts and he speaks second after Adam Bryant. David insists on doing his presentation in the dark.  His presentation runs long, but no one seems to care as it is some of the coolest work we’ve seen.  He covers a ton of great material, including some of his early work at Beach Culture magazine, Raygun magazine and Transworld Skateboarding, all the way to some of his more current work for 72 and Sunny and Quiksilver.  He concludes his presentation to a standing ovation and an immediate line for autographs forms.  He signs for everyone and makes sure to talk to everyone who waited, including in depth conversations with students from Nazareth Communications department.

We are the last people there. I thought at this point he would want to pack it in for the night, but he insists we head to Radio Social to “hang out” at the after party.  We close the place down and he looks like he could keep going.

I pick him up in the morning as he wants to get the “Wegmans experience.” He reveals he has a chip line that Wegmans carries.  We have lunch then fly over to CVS to pick up his high-altitude medication as he leaves shortly for a Graphic Design Poster festival in La Paz, Bolivia (11,942 feet above sea level).  I drop him off at the airport and he thanks me for “not making the trip suck.” He admits he would like to come back and spend more time here.  I’m in awe at the amount he is immersed in design and how much he paid attention to the small details all along the way. I’m am glad to have met and spent 36.5 hours with David Carson. 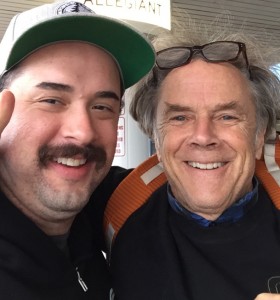